You are here: Home / Blog / Blog / The Importance of Anti Ligature Door Hardware for Patient Safety

A 2013 report at the US National Library of Medicin National Institute of Health reports that over 70 percent of the suicides that take place in psychiatry units in the United States occur by hanging.

Since the majority of suicides occur by hanging and the patients typically used doors and sheets as their tools, the report recommended removing the common anchor points and lanyards from the environment of care.

Patients fixated on suicide and self-harm view a room through unique eyes. They see hinges, doorknobs, and basic hardware all as potential points of harm, no different than if someone in a healthy state of mind saw himself surrounded by knives.

Architects for mental health facilities thus have a unique job in creating beautiful and yet safe places where patients can recover with less temptation to harm themselves. 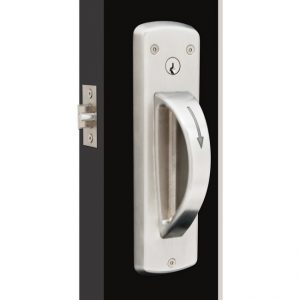 When we think of hanging, we often think of high places where individuals can hang a rope.

However, patients blinded by a mental illness see through different eyes. The VA found that the traditional 50 percent of all hanging suicides have a ligature point below the head. To treat patients with a mental illness, we need to begin seeing the room through their eyes.

In short, traditional knobs and levers are not suitable. Even a basic toilet with a traditional lever can pose a risk.

Furthermore, traditional hardware is not ADA (Americans with Disabilities) compliant, so it needs to be replaced. Rigid levers pose major risks as well.

In 2006 the VA National Center for Patient Safety completed a review that identified the causes of inpatient suicides and suicide attempts. They then created a checklist that facilities could use to make sure their environments were the safest possible for mentally ill patients.

The results were simple: knobs are out. Door knobs are easy to ty onto and are not ADA compliant. Additionally, door hardware with levers, especially rigid levers, posed a major risk.

Initially, companies provided a solution with a conical, spherical designed lock. This prevented ligatures, but even the average person had a difficult time grasping them. They also violated ADA standards.

Anti-ligature hardware, also known as ligature resistant hardware, is a design that prevents a patient from tying an object on it to harm himself or herself.

This type of hardware is specific.

Anti-ligature hardware began with levers. These levers are not right, thus complying with ADA standards, and are at an angular design with tapering that prevents anyone from tying a cord to them.

The closed design closes the space between the lock and the back of the door. This design uses a cylindrical lock design. 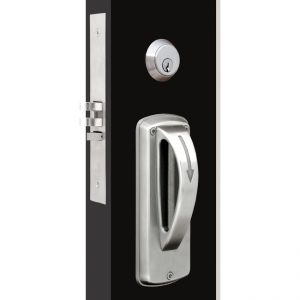 Anti-ligature locks have sloped or curved corners that make the attachment of any cord-like object nearly impossible. It just slides right off the lock.

The locking mechanism is controlled on the inside of the door but there is unrestricted access from the exterior side of the door. So health care providers can lock the door from the outside.

The rescue strike plate is a special hinge arrangement that allows the door to swing into the corridor. Typically doors swing into a patient’s room. However, this means a patient could potentially barricade the door and prevent people from coming in.

The rescue strike plate allows the door to swing into the corridor and prevents barricading from keeping people out of the room.

Load-release anti-ligature hardware is one of the more ingenious products developed over the years. Load-release means when the door or apparatus senses a particular weight, it releases.

Over the Door Alarms 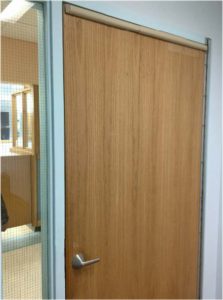 Over the door alarms qualify as anti-ligature hardware because they prevent patients from using the top of the door or a hinge as a ligature apparatus. The alarm is a sensing bar that will detect when an object is drooped over the door or wedged between the door frame and door.

The alarm also has a custom hinge that prevents the gap between the door edge and the frame on the hinge side.

When an alarm goes off, it alerts staff at the main console, telling them which door and which patient is attempting to harm himself. A key switch at the side of the door will reset the alarm.

there is also now a single enclosure alarm with a strobe and siren that goes with each room. This eliminates the need for a centralized nurse’s console, and anyone nearby can see a patient is in trouble.

Specialized hinges are designed with safety in mind. They have angles prevent patients from hanging any cords or other lanyards over them, and thus they are safe hinges.

When people become parents, they immediately see every potential danger in a room. Open light sockets and hanging blind cords pop out to them.

We need to see patient rooms through the eyes of a patient with a mental illness and recognize the harms that exist.

Anti-ligature door hardware eliminates a number of existing hazards and protects patients, giving them an aesthetically pleasing environment where they can heal and recover.

What are Anti-Ligature Locks and How Do They Work?
Scroll to top